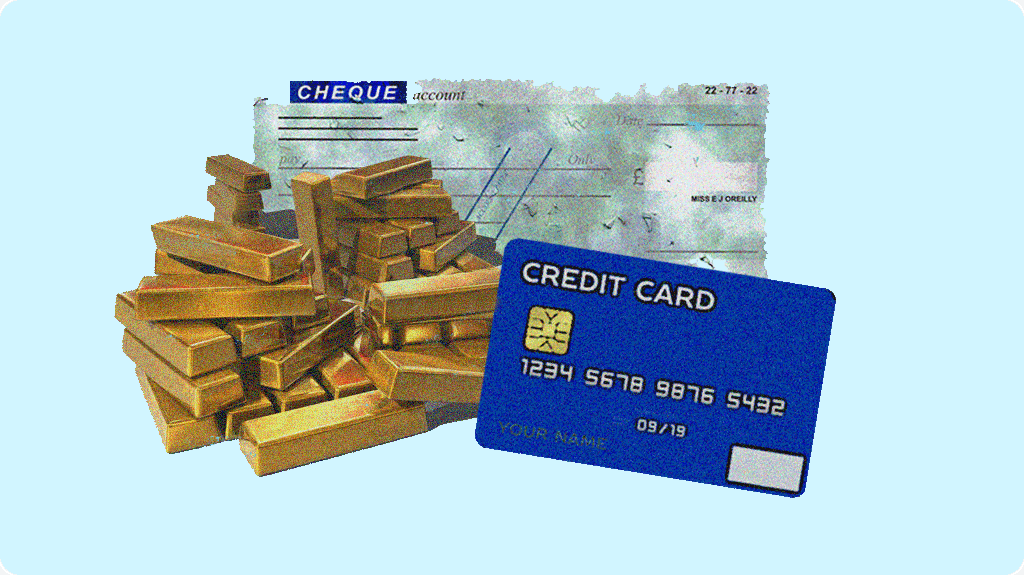 In economics, people normally distinguish between 3 different types of money:

Before exploring representative money in-depth, let’s first go through a few brief definitions of each to understand the distinction between them.

Fiat money is money that is backed by the government which has little to no intrinsic value in itself.

Commodity money is money whose value comes from the intrinsic value or use of the object from which it is made.

Some examples of commodities that have been used as a medium of exchange include gold, silver, cryptocurrency, salt, and cocoa. The value of commodity money derives from the substance or use of the money itself for some purpose.

For a detailed look into what commodity money is, and how it compares to fiat money, click here.

Humans have used representative forms of money for a very long time.

The first explicit evidence of representative money dates back to ancient China in which commodity warehouses issued certificates of deposit, guaranteeing the holder to a portion of the goods stored in the warehouse.

Things like land titles, wills, and bank checks all count as kinds of representative money.

For much of modern history, most economies were based on the gold standard; representative money in the form of government-produced banknotes and coins that were backed by precious metals like gold and silver.

For instance, if England set the price of gold to £600 an ounce, then the value of the pound would be 1/600th of an ounce of gold.

Up until around the mid-20th century, England followed the gold standard, a monetary system in which the value of a country’s currency is directly tied to its reserves of gold. The UK abandoned the gold standard in 1931 after World War I.

Easier to Use Than Commodities

One advantage of representative over commodity money is that it is easier to use and transport.

Instead of hauling around your physical goods, you can instead have a wallet of banknotes that represent some portion of your store of goods.

This also makes it easier to use than commodity forms of currency as representative currency forms a neutral medium of exchange through which people can trade goods and services.

For example, in a bartering system, if I wanted to find someone to trade 2 of my chickens for a loaf of bread, I would need to find someone who both needs chickens and does not need bread. With a representative currency, people agree on a common medium of exchange so they can get the goods they need.

Because it is not backed by anything other than the faith and trust of the government, fiat money is prone to depreciation in value due to inflation.

Because it is not tied directly to a physical commodity, fiat money can become undervalued if there is too much of it. Such was the case in Zimbabwe. Hyperinflation spurred on by the government subsequently printing higher and higher denomination bills to keep up with the inflation caused the value of the Zimbabwean dollar to tank, prompting a switch to the US dollar in 2015.

Because representative money is tied to a physical object, it is less prone to depreciation by inflation.

With a representative money system, the government cannot just print as much money as they want. The amount of money they can print is limited by the amount of the commodity they have.

For instance, under the gold standard, the total amount of money the government could print was limited to the amount of gold contained in its reserves. If the government began to print more money so that the value of the bill lowered, people could just turn their fiat money into gold to get the full value.

In a representative money system, because the value of money is tied directly to some specific object, the government has less control over the creation of money and currency. Governments could not just print more money than the gold reserves they have.

The finite amount of gold limits the amount of money the government can inject into the system which increases inflation. In a fiat economy, if a currency is devalued due to inflation, people have no choice but to still use that currency because there is no alternative.

For example, under the gold standard in the US, if the US dollar was devalued due to inflation, people could just change out their money for gold and silver. Tying the value of currency to some scarce natural resources prevents the government from abusing the currency system.

One benefit of a representative currency is that, similar to a commodity currency, the supply of money grows to naturally accommodate demand and keep prices stable.

For example, under the gold standard, if gold became overvalued, miners have an incentive to increase production, which adds more gold to the reserves and puts downward pressure on the valuation of gold.

So representative monies that are backed by some physical commodity are more reflective of market trends and have a tendency to correct themselves is a sustaining cycle.

The biggest issue is the massive amount of debt that currently exists in the world’s fiat economies.

Due to fractional-reserve methods, much modern money is held in the form of debt by banks and lending institutions.

While deflation is can sometimes be a good thing economically speaking as it allows people to buy more with the same amount of money, massive deflation in a market propped up by mostly debt could have disastrous consequences.

One side effect of deflation is that it causes people to hold onto savings, which naturally leads to less economic participation. Since much of our money is based on debt, switching back to a representative currency could cause massive deflation which could make the economy grind to a halt as people hold onto their money to pay back debts.

Subject to Boom and Bust Cycles

One positive feature of a fiat economy is that the value of the currency tends to stay fairly consistent regardless of changes in the market or economy. Rather, the stability of fiat money is based on the stability of the government.

With representative money, the value of money is tied to a physical good, so the value of the money is directly dependent on how much of that physical resources there is.

While not necessarily a bad thing, many people dislike boom and bust cycles and would much prefer the economic stability a fiat currency brings.

Not an Accurate Signal of Value

Many people feel that tying the value of currency to some determinant physical resources downplays and obscures the value that other less tangible goods like worker productivity and innovation bring to the economy.

In other words, the worry is that representative currencies place value in certain things and leave out other important measures of value.

Under something like the gold standard, the entire wealth of a country is just the total amount of gold that country possesses, which completely overlooks other important economic factors like the size of the population, levels of economic participation, and social goods such as education and well-being.

Less Control Over the Economy.

We said earlier that representative money has some advantages over fiat money because there is less potential for the government to overprint money and lead to inflation.

The converse is also true though.

The dominance of a representative currency does not allow the government to step in and ease economic losses in the case of large boom and bust business cycles.

In a representative system, the demand for a particular resource will rise and fall periodically, which can lead to economic crisis.

In fact, the transition to a fiat economy by most developed nations was in an effort to insulate their economies from the worst part of boom and bust cycles.

Are Representative Money and Fiat Money Really That Different?

Some economists believe that the distinction between representative money and fiat money is illusory and dissolves under closer inspection.

The core of this objection rests on the idea that even a so-called representative currency is still decided upon by mutual agreement, also known as a fiat.

Even if a nation adopts the gold standard, they are still adopting that currency on the assumption that others will accept that form of payment for goods and services, exactly how fiat money gets its value.

Fiat money gets its value only by a collective agreement, and so does representative currency.

It seems the key issue here is how one understands the “intrinsic value” that representative money is supposed to stand for.

Does any kind of money have “intrinsic value,” or is all money agreed upon solely by convention? After all, it was Aristotle who once wrote that [money] exists not by nature but by law.”

At some level, it would seem that all value is subjective in the sense that things only have value insofar as humans ascribe value to them. Why should we think that money is any different?

Here is a summary of commodity, fiat, and representative currencies.