How Does Crowdfunding Work? (Ultimate Guide) 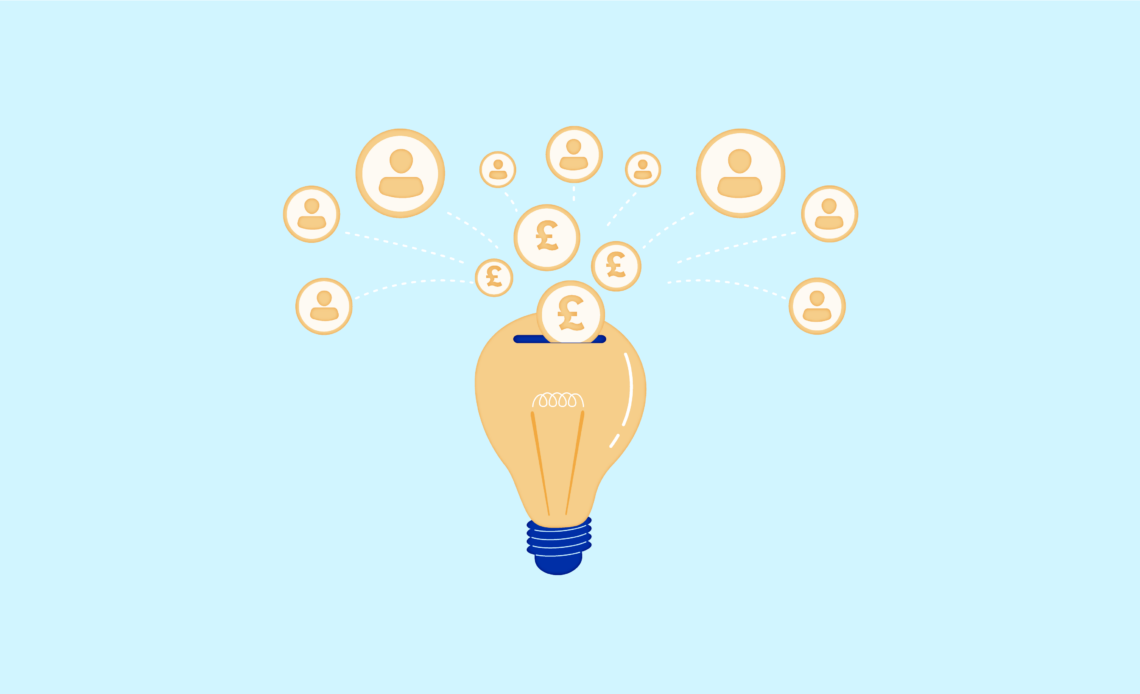 If there is one word that has been on everyone’s mind lately, that word most definitely is “crowdfunding”.

Crowdfunding has quickly become a very popular way for businesses to get funding and for people to fund their own individual projects and products. The great thing about crowdfunding is that it opens up monetary backing to the whims of the public.

It also creates a decentralized marketplace where business owners, creative individuals, and normal people can showcase their projects and products.

Crowdfunding has taken the world by storm in the past 10 years and there are a ton of crowdfunding platforms out there ready to be taken advantage of.

However, many people probably still have questions about the entire crowdfunding venture. The word “crowdfunding” is a general term but there are several distinct types of crowdfunding, each of which has its own structures, benefits, cons, and costs.

So to help you out, we put together our own ultimate guide on crowdfunding.

Without any further ado, let’s get to learning.

In many ways, crowdfunding is not really a new idea. It’s essentially a method of raising capital through a network of friends, family, individual investors, and customers. It works by allowing people to donate or invest money in a particular product, service, or charity for a potential profit or reward.

In many ways crowdfunding is similar to the traditional method of investing in companies. People put down money with the promise of some kind of reward or return on their investments.

The key difference between crowdfunding is in how it opens up these investment opportunities to a larger group of people.

For example, it uses networking opportunities like social media to expand the reach of businesses, creative individuals, and more.

In the past, investing was something of a rich man’s game. Unless you knew the right people and had a lot of start-up capital, you could not really get in on the ground floor of a business before it took off.

Private offerings are notoriously closed-door and it was hard for the average person to have a stake in an early-stage business.

Crowdfunding inverts this traditional model by opening up investment opportunities to the average person. Thanks to the internet, it is relatively easy for people to search for crowdfunded projects and donate or invest money.

Crowdfunding has really taken off in the past 10 or so years all around the world and several crowdfunding platforms have arisen to take advantage of this new fundraising model.

UK crowdfunding platforms like Seedrs, Crowdcube, Zopa, and Syndicate Room have had great success in the UK and abroad.

The real genius of crowdfunding is its more democratic nature. Business owners can pitch their products and services directly to the public and the public can decide what it is they want to fund.

Crowdfunding also gives the average investor a way to raise money and have a stake in a company for much less risk than traditional investing.

“Crowdfunding” is a general term and can refer to several distinct types of fundraising models. In general, there are 5 major types of crowdfunding models:

We will cover each type and talk about what distinguishes them from other models.

Donation based crowdfunding is the simplest model and involves organisations or individuals asking for a small donation to raise money for some cause they care about.

You will often see donation-based crowdfunding set up by individuals for personal needs like when someone is having financial trouble. Crowdfunding platforms can be used to increase awareness and exposure to get more donations.

Examples include a campaign to raise money for medical expenses, for care repairs, or for rent. This is the simplest kind of crowdfunding and has very few requirements or restrictions on its use.

Rewards-based crowdfunding is another common type of crowdfunding model. With a rewards model, backers get access to exclusive rewards from a startup or organisation, such as products or services.

Rewards based crowdfunding is very common in the tech sphere, where people will back projects to get exclusive early access, extra features, or special merchandise.

For example, many video game companies do rewards-based crowdfunding to fund their games and backers might get exclusive access to DLC packs, early access to the game, or some other kind of reward.

Another example would be an artist raising funds giving original artwork or reduced-price prints to backers. Rewards-based crowdfunding campaigns are probably the most common and widespread type of crowdfunding.

Equity crowdfunding is a model of crowdfunding in which backers of a company or organisation get a stake in ownership of the company for their investment.

The exact percentage varies depending on the specific business. Equity crowdfunding can be an excellent way to raise large amounts of startup capital and give average people a way to get in on the ground floor of an early-stage business.

It is a lot like investing in shares in the traditional stock market, except donations are generally smaller so there is less risk.

However, there is always some risk that you won’t receive a return on your investment as investing in startups and early-stage businesses is an inherently risky venture. Most equity crowdfunding platforms let you invest as little as £10 so there is much less risk.

Equity-based crowdfunding is a somewhat new model as new laws and regulations needed to be passed to make sure that tax requirements and legal documentation are accounted for.

In the UK, equity crowdfunding platforms are monitored and regulated by the Financial Conduct Authority (FCA) and there are several laws surrounding their use.

One great feature of equity crowdfunding platforms is that investors are often entitled to the Seed Enterprise Investment Scheme (SEIS), which offers tax advantages to those who invest in small businesses.

Investors can get up to a 50% deduction of their investment amounts off their income tax bill at the end of the year. Equity crowdfunding is often called “crowd-investing.”

Debt based crowdfunding, also known as peer to peer (P2P) lending, involves loaning an amount to a company with the promise to pay it back with interest.

In that sense, P2P crowdfunding is a lot like a company issuing corporate bonds. This model ensures that companies can have the money they need when they need it, without having to give equity to backers.

On the investor side, P2P lending is a good choice because you get a guaranteed return plus some interest. With P2P lending platforms, you can usually get anywhere between 2%-6% interest on the loaned amount.

It is a good alternative to equity crowdfunding that carries less risk, though there is also less reward as a result.

Real estate based crowdfunding is a relatively new crowdfunding model that allows people to pool their money to invest in properties around the nation and globe.

It is a great idea for the average person because it significantly lowers the amount of capital one has to put up to have a stake in some property.

High capital requirements are one of the major factors that prevent people from investing in properties. Additionally, it is much more straightforward to invest in a real estate crowdfunding platform than having to go through the process of getting a property loan from banks or the government.

Real estate crowdfunding typically has higher minimum investment requirements—usually to the tune of £5,000, depending on the platform and specific real estate project.

Investors will receive regular payouts equal to their proportional ownership in the project. In a lot of ways, real estate crowdfunding is similar to a traditional real estate investment trust (REIT).

Crowdfunding has a lot of pros and cons for both individual investors and businesses. In this section, we will cover some of the major benefits and drawbacks for both groups of people.

How Are Crowdfunding Campaigns Regulated in the UK?

In the UK, not all types of crowdfunding campaigns are regulated by the government.

For example, donation and rewards based campaigns generally have no regulations. This is both a positive and a negative.

The positive is that there are really no restrictions to starting a campaign but the negative is that scam campaigns exist in bounds. Certain platforms might regulate the kind of projects that they feature on their marketplace.

For example, Crowdcube does not allow projects of a sexual nature or projects related to film.

Equity and debt-based crowdfunding platforms are regulated by the FCA. The FCA makes sure that these kinds of campaigns are executed according to investment and taxation rules.

In fact, in order to start an equity or debt-based platform, you must get approval and certification from the FCA. Obviously, these restrictions exist to minimize any investor malfeasance, such as money laundering or tax evasion.

Seedrs is an equity based crowdfunding platform that allows users to invest and gain a share of equity in a company.

The platform originally was founded in the UK but has since expanded around the world and allows international investors. Seedrs’ focus is on fundraising for startups and early-stage businesses. One of the best features of Seedrs is the way that they handle points of contacts between investors and companies.

The platform handles all the details of preparing legal documentation and keeping track of campaign progress.

Crowdcube is a fundraising platform that allows both equity-based funding and debt-based funding. Crowdcube also allows a wide range of earnings goals from £10,000 to millions of pounds.

Crowdcube and Seedrs also recently announced a merger to be completed in early 2021 to bring an even larger crowdfunding marketplace to the public.

Syndicate Room offers equity fundraising to businesses that have already been established and that have the backing of independent investors and venture capitalists.

As such, the platform has a very rigorous vetting process as they want to feature projects that already have a lot of attention from traditional investment circles and have a high chance of success.

Who Is Crowdfunding Best For?

The real genius of crowdfunding is how it has made investing more tangible to the broader public.

In the past, capital requirements have been one of the major barriers to people investing. Since crowdfunding platforms generally only require small amounts, that means that more people can invest in a startup or small business.

Crowdfunding also presents the opportunity to make excellent returns by getting in early and establishing ownership.

Some of the greatest investment success stories involve people investing early in a company that explodes in later years. So if you are interested in diversifying your portfolio, then crowdfunding might be a good idea.

Crowdfunding is still a relatively new model of capital fundraising and is expected to only grow more popular in the digital age.

As more businesses turn to alternative methods of funding, crowdfunding will become more widespread. Certain sectors of the economy will benefit more from crowdfunding than others, but the overall effects will be for the positive.

By making investing easier for the average person, crowdfunding makes it so regular people can have a stake in something larger than themselves.