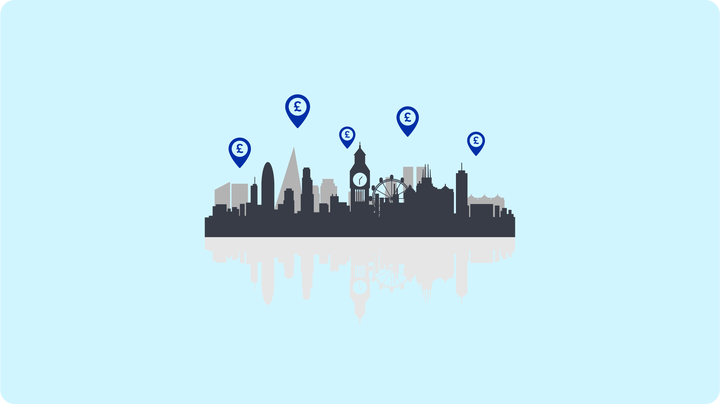 Living in London can be expensive, and I’m sure you didn’t need me to tell you that. The Independent called the Greater London area the U.K’s 2nd least affordable city, with Oxford holding down the top spot.

The truth is, however, with increased living costs comes great investment opportunities. Purchasing a property in London is a surefire way to secure a desirable plot of land.

For centuries, the greater London area has been the destination for travelers from all across the globe. In the past 30 years, the city has seen tremendous, steady growth in both population and the tourism industry.

With this in mind, we’ve compiled this list of some of the best places to invest in around the great city of London, England in 2020. 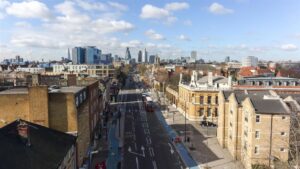 With the development of the Whitechapel Crossrail Station, an economic boom is expected in this area of East London. For those who are only familiar with Whitechapel as a board game space in Monopoly, the area is located with bits both in Zone 1 and Zone 2. Whitechapel is one of the best places to invest in London for many reasons.

Besides the up and coming Crossrail station, one of the primary reasons to invest in Whitechapel is the area’s current connections. Whitechapel gives easy access to the Hammersmith and City, District, Overground, and Central lines via the Aldgate, Aldgate East Tower Hill, Whitechapel, Shadwell, Tower Gateway and Fenchurch Street stations.

So why invest in Whitechapel? Because the prices are low and the population is growing. Whereas most people are thinking, “is Whitechapel safe?”,  investors are scooping up, renting or selling properties in this quickly developing area. Whitechapel is experiencing gentrification at one the highest rates in the area over the past decade, and property values are expected to continue to increase as a result.

Although only serious real estate investors may be interested in population and property value growth, Whitechapel is an attractive place to live for a number of reasons. Whitechapel is located right next to London’s financial district and is close to many attractions, like Victoria Park, Columbia Road Flower Market, Broadway Market, London Fields, Tobacco Docks, and Shoreditch High Street.

The housing market is fairly diverse in Whitechapel, despite being such a confined area. Investors can choose between classic Victorian homes and a wealth of large, modern housing development projects. For now, prices are lower than the London average, however they are expected to rise as more and more young professionals flock to Whitechapel. 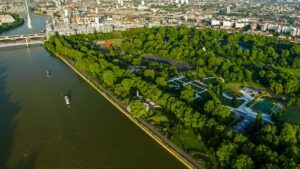 In southwest London, Battersea is a rapidly growing area that is most famous for the iconic towers of the Battersea Power Station that dominate the skyline. Although the coal plant has been decommissioned, the building is being repurposed as a residential, retail, and commercial hub built for the 21st century. This £8bn development is perhaps the most obvious sign that the area is undergoing positive change, however there are many more reasons to invest in Battersea.

Beyond the power station, the U.S. embassy is perhaps the most exciting recent development in the Battersea area, on the shores of the River Thames. On the other side of the power station, lies Battersea Park, a long-time green-space that’s gone through several redevelopment projects. The Battersea Park offers a zoo, a lake, an art centre, cafes, and a treetops rope course among the gardens and walking trails.

Battersea sits within the borough of Wandsworth, an area that has seen the most inter-London migration, for residents moving within the city. The increased population is made up of individuals from all backgrounds, with rentals home sales ranging from inexpensive to world-class. Northcote Road and other cultural bar and restaurant areas attract the young and social crowd, while some of the U.K.’s best public and private schools are attractive to families moving to the area.

With the power station attracting companies like Apple to bring more jobs to the area, Battersea is en route to becoming one of the most premium areas in all of London. There is ample opportunity to rent or flip properties, however the stunning features and vibrant lifestyle may sway some investors to keep the property for themselves. 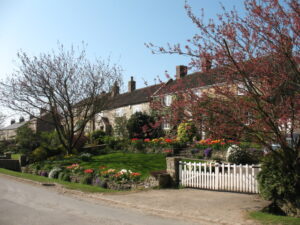 Kilburn, yes, Kilburn, the area beyond Nottinghill and Queen’s Park that you’ve been told not to visit. Kilburn spans the burrows of Camden and Brent and has a reputation as one of the most dangerous places in London. Due to its proximity to neighbouring gentrifying areas, investing Kilburn is slowly becoming less of a fallback plan and more of a great opportunity as time passes.

Let’s start with some numbers. Kilburn has 3 combined overground and underground stations, a 2011 population of about 30,000, and a £600 million housing project that will add 2,400 homes to buy, sell and rent over the next 10 to 15 years. The area is well connected and property values are lower than the London average. These combined factors make it a potentially great spot for commuters, with local lifestyle improvements slowly being made.

So although it may be a bit more long-term than other areas, Kilburn has some of the highest potential in terms of ROI in London area property. Local attractions like the Tricycle Theatre, the Mecca Bingo Hall, and the rows of shops are almost guaranteed to be soon surrounded by more thriving, independent businesses. In 2020, the prospect of living in Kilburn may not be that attractive to you personally, but the investment opportunity is undeniable. 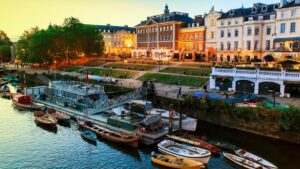 In southwest London, Richmond is a scenic area that is quickly attracting property investors, big tech companies, and more. Richmond has a thriving local economy with some of the country’s highest self-employment and business survival rates. With this in mind, investors in it for the long run can make it big with properties in Richmond.

First of all, Richmond is extremely well connected. With close proximity to the international Heathrow airport, Richmond has attracted headquarters for global companies like eBay, PayPal, and The Securitas Group. Moreover, the area also is accessible by two major roadways and two train stations for easy access to different parts of the city.

As more professionals become employed in Richmond, the population is seeing steady growth. With so much to do and see in the area, some residents may be perfectly happy never leaving the borough. Richmond is home to 100 parks and the highest concentration of attractions outside of central London. From theatres and museums to pubs and botanical gardens, there is something for everyone in Richmond.

Who is Richmond attracting the most? Young, educated professionals. So whereas it may not be the cheapest area initially on this list, Richmond’s overall economic stability is a surefire sign that guarantees ROI for property investments. 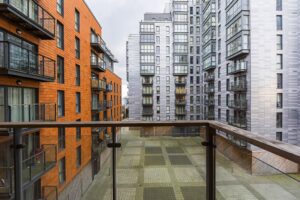 Let’s move outside of London a bit and take a look at Slough. Now don’t let The Office dictate how you feel about this neighbourhood, it is actually one of the best places to invest near London in 2020. Employment, housing, and transportation all make Slough an affordable investment location primed for a value increase.

Thorough developments in transportation across all sectors have led to Slough becoming one of London’s top commuter destinations. By train, Slough is only 15 minutes from Central London.

Currently, property values in Slough are below the average for the London-area, despite Slough’s impressive population growth (over 15%) being greater than the growth rate of England and Wales.

So why are people moving to Slough? The jobs, of course. Slough is home to companies like O2 Telefonica, Mars and Amazon which contribute to the area’s multi-billion GBP turnover. In fact, Glassdoor currently lists Slough as the “Best UK City to Live and Work In”.

Essentially, Slough works as a residence for those both commuting around the area or sticking right in the neighborhood. In 2020, more and more workers will soon be commuting to Slough via Crossrail, as the city is building a Slough station on the Elizabeth Line. With individuals renting office spaces, having lunches, and corporate outings, Slough’s local economy is sure to continue its steady growth at an even more rapid rate.

To the south of London, Horley is one of the best commuter towns to invest in around London. The region neighbours Crawley to the south, with easy access to the Gatwick Airport, which is the second largest airport in the U.K. In addition to air travel, Horley is also extremely well connected by train with round-the-clock access to the centre of London in as little as 45 minutes.

Of course, what makes Horley particularly attractive as an investment area is that it is much more than just a commuter town. Horley has its own thriving economy, boasting business parks with about ⅓ of the population working locally in town. Beyond just business, Horley boasts excellent schools, a thriving theatre scene, and countless sports clubs for cricket, hockey, football, rugby, and more.

Now, we’re not saying it’s too late, but the secret may be out because Horley’s property values are among the highest in the country. In fact, it’s been estimated that the average price of a home in Horley has gone up 48% in the last five years. With that in mind, housing developments are sprouting up all over the area and investors still have the opportunity to put money into an area that has already shown such significant growth. 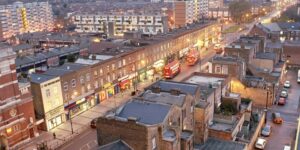 In East London, the historic district of the city that has undergone many changes over the past few centuries. From farmland to industrial property, the space in Barking above the River Thames has always been used for what Londoners need most. In 2020, that thing is affordable housing, which makes Barking one of the best places to invest in local property.

More than anything, the Barking Riverside is a huge development project that has caught the eye of many interested investors. Similar to what is being done in Battersea, the Barking Riverside is a mixed-use redevelopment project on a former power station. In Barking, there are plans for building over 10,000 homes on a 440 acre site. This is said to increase the local population by approximately 26,000 people.

In addition to the homes, the Barking Riverside revamp includes schools, leisure facilities, a new train station and riverboat service. Although the Barking railway station has been servicing Underground travelers for over a century, it is great to know that huge population booms are being supported by additional transportation infrastructure.

Currently, Barking properties are below the London average. Although the new developments may take years to fill up, what is certain is that the Barking area is one of East London’s best places to invest in. 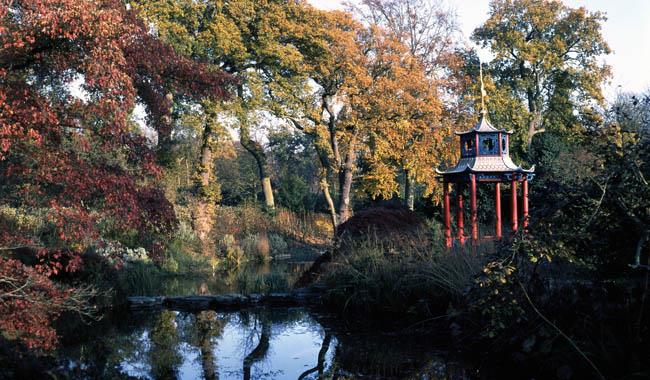 Lastly, for those interested in avoiding the bustling city centre of London, investing in Bracknell is a great opportunity to benefit from the city’s growth in the western most part of its greater area. Bracknell is a town of over 84,000 residents and with local entertainment and easy access to surrounding areas.

Geographically, Bracknell makes perfect sense. From the Bracknell and Martins Heron railway stations, commuters can easily access London Waterloo or Reading, depending on the direction they are headed. A railway also connects Bracknell with the Heathrow Airport, 13 miles to the East.

Beyond its connectivity, Bracknell is a business hub with companies like 3M, Panasonic, Dell, HP, Hewlett Packard Enterprise, Siemens , Riverbed, and Honeywell all with offices in the area. After work, there are plenty of opportunities for music, sports, and arts enthusiasts to enjoy a night out on the town.

So yes, Bracknell is a great place to live, and an even better place to invest. The area is known as a “Cornerstone of U.K.’s Silicon Valley” and has yielded some of the highest property value increases in the past two decades. With continuous improvements on the towns city centre and countless housing developments in order, Bracknell is slowly becoming one of the highest valued property areas in west London, and one of the best places to invest in 2020.